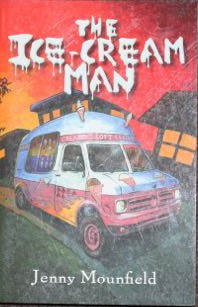 Three boys like to visit a secluded billabong to escape their everyday problems and the challenges that life has presented to them. Marty suffers from Cerebral Palsy and spends most of his time in a wheelchair, Rick is living with his alcoholic mother after his dad died in a car accident, and Aaron is being severely bullied by his older step-brother. Their difficulties bring them together as friends, but the encounter with the ice-cream man will bond them for life. It’s very hot this summer, and the ice-cream van has been doing the rounds about town, tinkling its music to let all the kids know that it’s coming their way. The boys decide to play a prank on the ice-cream man when he doesn’t stop the van for them. What seems like getting even has consequences that the boys are not prepared for.

The Ice-Cream Man is a thriller for upper primary school to lower high school students. It was a little creepy at times, with some foul language and violence, but it wasn’t too scary for kids to read. Though perhaps they might think twice about playing pranks on other people in the future!

The main storyline involving the prank and the scary, stalking revenge that the ice-cream man begins against the boys was interesting and suspenseful. I did want to keep turning the pages to see what would happen next. I hope there are no crazy ice-cream men out there terrorising children, but this book makes it feel like there just might be one lurking around the next corner, just waiting for the slightest provocation.

I also found that I was quite interested in the boys themselves. Each of their stories were different, and each of them were facing different challenges that most kids will not have to endure, yet they were still moving forward and were able to trust and rely on each other. Friendship is so very important in life, and this is a nice reminder that friends don’t care what you look like or where you live, but they will always have your back.

The three boys were well described, though I found Aaron’s hair colour to be incongruous to his character. I just kept wondering why he would dye his hair in a shade that would only antagonise his step-brother further, when he was already scared of him and trying to stay out of his way. Of course, it’s completely inconsequential, it was just one of those little things that get stuck in my head, and it certainly didn’t detract from the suspense of the story. Otherwise, Aaron was a little down-trodden, as could only be expected after the treatment he had been receiving from his step-brother. I thought he became more likeable as the story progressed. I liked that Marty felt liberated and empowered by his wheelchair, that he didn’t feel sorry for himself. He made for an inspiring main character. And I felt that Rick was leading the hardest and saddest life of the three of them. His mother should have been there for him, but in her grief, Rick was left as the responsible one. Sad though it is, it smacked of reality. All three situations were well written.

I think The Ice-Cream Man is a good introduction into this genre for kids and teenagers. It was a good story and well written. I am happy for my third grader to read it, though perhaps not just before bed!