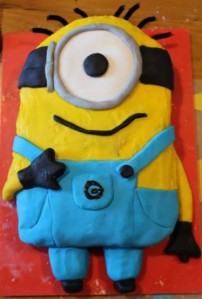 After watching Despicable Me and Despicable Me 2 many, many times, when the Minion Movie came out, my kids were keen to see it. They loved it, and have been a little minion crazy ever since. This minion love has even extended to cakes now!

The cake base was made from two butter cakes, one square and one round. I cut the round one in half to make the head of the minion. I also leveled the top of the cakes to make it easier to decorate.

I used a basic butter cream recipe to make the yellow icing, which I applied to the entire cake. This provided me with a base on which to stick the fondant icing I used for making the cake into a minion. To make sure I was making the cake look like an actual minion, I kept a picture of a minion nearby to check on throughout the decoration process.

The rest of the decoration was done using fondant icing. I started with the eye, rolling out some white fondant until a few millimetres thick. I used a cup to make a neat circle, and then lifted this carefully onto the cake. I coloured the white fondant with a little bit of black food colouring to make the silver edge of the goggles. I rolled out a thin snake of the grey fondant, and shaped it around the edge of the eye, carefully smoothing it down to cover the white edge. I used a little bit of the left-over butter cream to stick the grey fondant down to the white fondant.

Working on the eye.

To get fondant that was really black, I used a pre-coloured fondant. From this, I made the goggles straps and the pupil of the eye. To make the goggles more realistic, I used the back of a knife to press a line down the centre of the straps, and I fashioned a hinge on one side from some of the left over grey fondant. 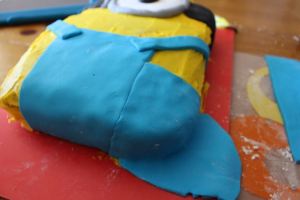 Adding the overalls, section by section.

To make the minion’s overalls, I coloured the white fondant with blue gel food colouring. I prefer the gels to liquid, as I’ve found them to produce a more vibrant colour in the fondant. Once I was happy with the colour for the overalls, I rolled out the blue fondant. I made the overalls in sections, first the centre piece, using a rectangle of blue fondant, then the sides of the overalls, and finally the straps. Each piece was then fitted carefully against each other and then trimmed at the base of the cake. I added little black fondant buttons to the straps, and an extra blue patch for the centre pocket. The side pockets were created by pressing a line into the fondant using the back of a knife. Again, I used left-over butter cream to stick the fondant pieces down.

The arms and legs were pure fondant. Fondant is easy to use and shape, a lot like plasticine. I just made the shapes I wanted and added them to the rest of the cake.

The mouth is a thin line of black fondant, while the minion’s hair is pieces of cut up black pipe cleaners (chenille sticks). The symbol on the front of the overalls I made using cake decorating writing fudge.

This cake took me a couple of hours to make, but I was very happy with the results. My kids thought it was pretty awesome too!