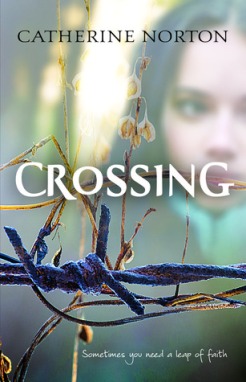 Cara has lived behind the Wall her entire life. She knows nothing but food shortages, and responsibilities beyond her years. When Leon and his family move into the top floor of Cara’s apartment building, she gets a glimpse of how things could be different.

Crossing was a fast, captivating story of a different life. The city in the story is nondescript, and could be anywhere in the modern world. However, the Wall is reminiscent of the Berlin Wall in Germany, and the lifestyle also had elements of socialist Russia during the Cold War. Everything about the city made me think of the colour grey; the clothes, the streets, the buildings, even the sky. The city felt defeated, along with all its residents. Their lives were full of hardships, but the loss of freedom felt particularly oppressive to me, especially when observing the view over the Wall from Leon’s apartment.

Growing up with such restrictions and deprivations was tough enough, but Cara also had to cope with her parents’ mysterious work trips, and the responsibility of caring for her younger sister, Lilith, during those times. Even when her parents were home, they didn’t appear to take much interest in Cara anyway, with most of their focus on Lilith, as she showed promising aptitude for computers that would make her useful and valuable for the government. Cara was quite isolated even within her family unit. I felt quite sympathetic towards Cara, and I was glad that she found a friend in Leon.

The story jumped from past to present quite a lot, and it was sometimes not clear when the time had changed. Otherwise, the story was good. It did end a little faster than I had expected, and I was left pondering a few unanswered questions, which is not necessarily a bad thing. This can be a creative opportunity for the reader! Overall I liked Crossing.

Crossing is most suitable for upper primary school and lower high high school students. My fifth grader read Crossing in one sitting, and told me afterwards that it was a good read for her. She felt that she read about a life vastly different to hers, and it made her appreciate her own situation and family more.