Now that’s it’s spring, we’ve started barbequing again. We love to use the bbq, and eat outside when it’s nice. Having our first BBQ of spring made me think of plastic plates and napkins. And since the kids had been playing with a tub of birdseed earlier in the day, I thought we could have a go at growing some of it.

Turns out we didn’t actually have plastic plates, but Big L found some plastic bowls and napkins hidden away on top of a cupboard. The kids took two bowls each, lined them with a couple of napkins, and then sprayed them with water. Then they each tossed some wild birdseed into the bowls, and sprayed them again. A was a bit disappointed when nothing happened straight away.

Birdseed in the bowls.

We moved the bowls into a spot on the dining table where the sun shines through a window in the mornings. Both L and A have been very dedicated in watering the bowls at least twice a day (along with the table, floor, and anything nearby). 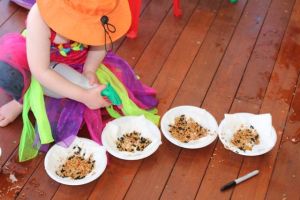 A spraying the seeds with water.

After a few days some of the seeds began to sprout. A was very excited to see the first sprouts coming up. The kids have checked on their bowls multiple times each day to see how they are going, and they have started to notice that the different seeds have different sprouts, and some are different shades of green. L noticed that the different seeds have sprouted at different times, and some are growing more quickly than others. A has been particularly interested in the sunflower sprouts, as the seed shell is still on most of the sprouts, and she’s been wondering if it will come off. I told her she will have to continue to watch and see. 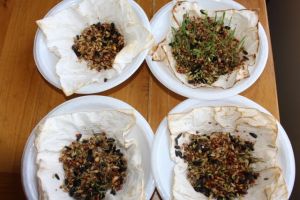 This activity has stimulated discussion about the differences between plants and their growth, including what they need to grow. L was a bit sceptical that anything could grow on the paper napkins, as plants normally need soil. Growing them like this has been good because she could see them from the first tiny sprout, that she can’t see when it is growing in soil. She has enjoyed watching the seeds grow, and we will continue to watch them for as long as we can. 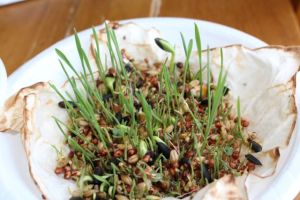 The bowl with the best growth (also the most seeds, thanks to A’s enthusiasm). 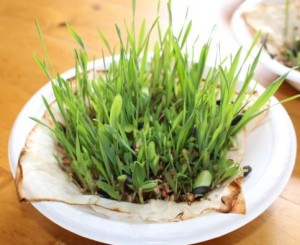