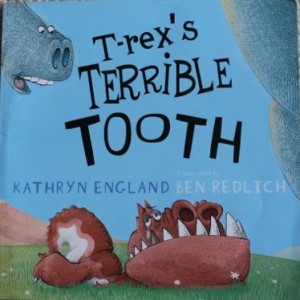 Young Tyrone the T-rex has a toothache. A toothache so bad that he is unable to eat his normal meaty diet without horrendous pain. Convinced that he is about to die of starvation, he breaks down wailing. A passing Brontosaurus informs Tyrone that soft fruit and vegetables are plentiful, and by changing his diet he will certainly survive. Tyrone gives his new diet his full attention with unexpected results.

This is a delightfully humourous rhyming story featuring dinosaurs, one of my kids’ favourite topics, so it is a hands down winner in our house and has been read numerous times to both my preschooler and second-grader. We love reading this book out loud to make the most of the rhyming text, and it always makes us laugh. My preschooler likes the meat meals Tyrone dreams of but can’t eat, such as Triceratops lollipops, while I like his melodramatic response to his toothache. The ending is very satisfying and my kids think it is hilarious. A great book for preschoolers and lower primary school children, I highly recommend T-rex’s Terrible Tooth for every little dinosaur fan!