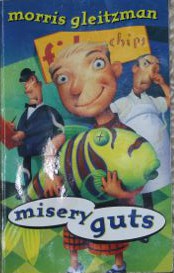 Keith and his parents live above their fish and chip shop in London, in a drab building, in a drab street, in a drab city. Keith thinks his parents are a pair of misery guts, depressed and unhappy with life, and all he wants to do is cheer them up. He decides the best thing to do would be to move to Australia, where he believes they will find paradise and happiness. His parents do not want to move to the other side of the world, and they resist Keith’s plan for as long as possible, but finally, after a devastating fire, they agree, and pack up for the long flight to their new home on  the far north coast of Queensland.

A hilarious story of a boy trying his best to make his parents happy, this book made me laugh, both as a child and as an adult. Only a boy could think a smelly, dead rainbow fish would be the perfect cure for depression! But to go all the way to Australia based on nothing more than a fish and a picture takes plenty of courage. Keith works hard to pull it off, including hiding their proximity to the dangerous jellyfish, coconuts and crocodiles that inhabit their new home town. Keith even makes a new friend and ropes her into his plans for his parents’ happiness. Suitable for primary school students, Misery Guts is a heartwarming tale of a boy’s love for his parents, and the lengths he will go to make them happy. Well worth the read.