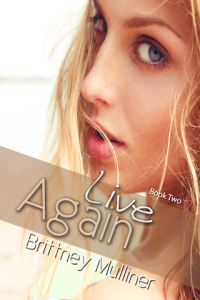 Live Again picks up Aubrey Tate’s story shortly after Begin Again ends. After the terrible fright she had on the night of the winter formal, Aubrey’s life has continued on with increased protection and supervision from her friends and family. Mike is spending a good deal of time worrying about her, as is Carter, while Luke has run a million miles. Aubrey is hurt by Luke’s withdrawal, confused by Carter’s behaviour and overwhelmed with Mike’s constant presence and assertion that she is now his. She is still spending time with Gage, and she even has an evening or two with Tucker, who’s mostly a jerk. Aubrey must deal with her boy issues, and face that she now has a new stalker that wants to hurt her. She is also coping with increased frequency and intensity of dance practices as she will be representing the Dance Academy in competition soon.

Just like the first book in the series, Live Again is well written, detailed and engaging. There is plenty of drama, especially of the boy kind, and some mystery too. It was tantalising wondering who the stalker was, but I was kept guessing right to the end. The ending was much more satisfying than in the first book, this one wrapped up nicely, resolving everything. I thought it was unnecessary to have this story across two books, when it could have easily been one longer book. I was glad that I had Live Again to start reading straight away, otherwise I would have been frustrated at the end of Begin Again, waiting to find out what happens.

I liked the majority of the characters, and thought they were easy to relate to. Through the story the reader gets to know Aubrey quite well, as she is the antagonist of the story, but we learn a little about many of the other characters as well. I liked Aubrey and McKayla, they were pretty decent kids despite their privileged upbringing. I also liked Brandon and Carter, trying to act like responsible adults to protect Aubrey, yet not long out of their teens themselves, and prone to silliness, such as eating competitions. Talia and Alexis sort of blurred together for me, as they were so similar. So did their boyfriends. That didn’t detract from the story, I just had a much better sense of McKayla and Mike. I had mixed feelings about Mike, since he seemed a bit controlling to me, but he played an important role in Aubrey’s life and in the story. One character that I really did want to know more about was Gage, he was rather enigmatic!

As in Begin Again, a few things seemed odd to me, though I have put that down to never having been a rich, beautiful teenager in California! Money, cars, shopping… And a group of teenagers travelling to an island by themselves for the weekend, and all the parents being okay with this? Not to mention Brandon agreeing for Aubrey to go while her stalker is still out there. Yeah, that seems like more freedom than the average teenager might have, but still, it was a nice way to give Aubrey time to get to know some of the other students.

I enjoyed reading this teen drama. Live Again is suitable for middle to upper high school students, and should be read directly after the first book in the series, Begin Again. A third book in this series is due out later this year. I will be looking forward to seeing what trouble Aubrey find herself in next.

*I received this book as a digital copy from the author, who asked me for an honest review of this book. I did not receive any other remuneration, and the review is composed entirely of my own opinions.