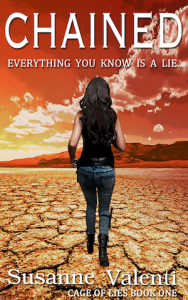 Years before, humanity was afflicted by a contamination event, which left many dead, and others terribly mutated. Plants and animals were also affected, further endangering humans. The remaining people fled into the walled cities, and began living as part of the population, contributing to and being ruled by the strictures of the new society. Maya has grown up within the safety of the city, hidden behind The Wall, but when her life takes an unexpected course, she finds herself being led beyond the safety zone of the city. Suddenly her eyes are open to a whole other world, making her question everything she has ever been told.

Chained is a fast paced young adult novel suitable for high school students and up. It is packed with action, adventure and a little romance. Nothing explicit though! The story was rather violent with a lot of fighting and deaths, including the use of weaponry such as knives and guns. I enjoyed the action sequences, they were well written and exciting, perfect for getting the adrenaline pumping!

The plot was well developed and logical. I found the story to be engrossing, in fact I had a difficult time stopping myself from reading the next chapter when it was time for bed! Maya and all the residents of the city were being kept in the dark about so many things, and the Guardians used their fear of contamination to control them, a bit like a large cult. As Maya and Laurie began to discover some of the secrets, it made me wonder just what else was being hidden or controlled and why.

The world that has been created in this dystopian novel has the massive enclosed cities, but the rest of the land is similar to that of today, except that everything is exaggerated in size, speed and cognitive functionality. In some ways this makes it scarier, the animals and plants are familiar, yet like nothing we’ve ever experienced, it made me think of what the world might have been like in prehistoric times.

The SubWar area of the city really brought out the worst in people, who were not only condemned to fight for their lives, but appeared to enjoy the killing of others. This might be a comment on the nature of humanity laid bare. The whole situation with the serial killer Grey was a bit odd though. He was completely unhinged, but the way that he looked at Maya, I thought there would be some prior connection between them. The concept of going to fight in SubWar as a punishment is very scary, but Grey and his cronies were just terrifying.

Maya is the main character, and the narration mostly follows her throughout the book. She is petite with a tendency towards anger when frustrated, and has a habit of being somewhat clumsy. Overall I liked Maya, though I thought she should have been straight with Taylor about how she feels about their relationship. However, I think many teenagers could relate to her situation with Taylor, growing up friends, and then puberty changing things.

All of the characters were well written and likable, though I felt a bit sorry for Taylor, with his unrequited love interest in Maya. He seemed like a nice guy, loyal, caring, playful. I thought he would play more of a role in the story than he did, and I would have liked to get to know him a bit better. It could have been an interesting sub-plot with both Taylor and Coal lusting after Maya! Coal was more of a dark horse than Taylor. He has experienced a hard life that has sculpted him into a more mature and serious character than his years would normally lead to. Coal’s sister, Alicia, is tough, but also cheery and cheeky. She often has something snide on the tip of her tongue, but she genuinely embraces life and the people she shares it with. She was a big personality that I really liked. Laurie was more reserved, yet still strong and tough when required.

Susanne Valenti is an emerging author, and Chained is her first book in a five book series called Cage of Lies. This is the start of a great series for fans of dystopian fiction and I am very excited that there is more to come!

*I received this book as a digital copy from the author, who asked me for an honest review of this book. I did not receive any other remuneration, and the review is composed entirely of my own opinions.

Leave a Reply to The Galaxial Word Cancel reply