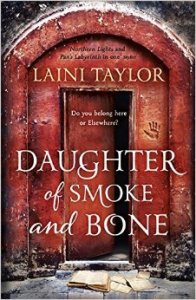 Daughter of Smoke and Bone by Laini Taylor, novel, 418 pages, published by Hodder Paperback in 2012.

In the city of Prague there lives an art student with a secret life. Karou is only seventeen, incredibly talented artistically, and sporting bright blue hair. She  lives in a flat on her own, but her family are not far away, just a knock and a step through a magical portal into Brimstone’s shop, part of Elsewhere, where he sells wishes in exchange for teeth. Karou runs errands for Brimstone, whilst also attending school. Beyond the shop is a whole other world at war, Angels pitted against Devils, and it has raged on for a century.

I raced through this enthralling fantasy novel. The plot was fast paced and gripping, at each chapter’s end, I just had to read the next one! It took most of the novel to explain Karou and Akiva, though I had an inkling of what had happened, it was more complicated and even better than I expected! I just loved it! The writing was excellent, the plot strong and the characters complex. It spoke to me, and I replied “wow”.

Karou is a unique girl. I’m envious of her blue hair and her ability to draw! How strange it must have been growing up with one foot in either world. Though Brimstone sounds scary and gruff, he obviously has a great deal of affection for Karou. The other Chimaera that raised her, whilst also looking a bit scary in their half-man half-beast bodies, love and protect Karou. Akiva is so dark and brooding, but powerful and beautiful too. His pain was palpable, likewise his passion. I also liked Zuzana, with her fierceness in such a tiny package. The characters came alive for me, I watched them fight, and love, and play.

Daughter of Smoke and Bone is suitable for upper high school students and adults. Mature younger teenagers should also enjoy this engaging story, but there is some violence and sexual references. This really was an awesome read, and I am very excited about getting my hands on the next book in the trilogy, Days of Blood and Starlight.