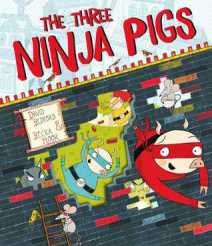 The Three Ninja Pigs by David Bedford and illustrated by Becka Moor, paperback picture book, published by Simon and Schuster, UK Ltd in 2016.

The Big Bad Wolf is up to his tricks, messing up this, and breaking that. The Three Ninja Pigs keep getting the blame for his antics. Will they be able to put a stop to the Big Bad Wolf’s villainy?

The three little pigs have had a make-over, as ninjas! They twirl, they jump and they Hee-ya! And they are totally adorable in this exciting twist to an old tale. My four year old boys loved The Three Ninja Pigs, requesting multiple re-reads.

This story was great fun and the illustrations were bright and interesting. The Wolf really was being quite naughty, creating chaos at every stop. My boys thought the mess he created was funny, and they enjoyed pointing to things that had been broken or knocked down. They also laughed at where the Ninja Pigs ended up after each encounter with the Wolf, such as stuffed in a vase, or hanging from the ceiling. We liked spotting the various fairytale characters through the book, such as Little Red Riding Hood and the troll under the bridge.