T1 often requests we listen to the same song over and over whenever we are in the car. For a very long time, that song was the Christmas carol, We Three Kings, but recently he decided we should listen to the Purple People Eater song. Having now heard it many, many times, I find myself singing it in the shower, under my breath at work, while I’m out walking…. I remember singing it when I was young, but in case you don’t know the song I’m talking about, it goes “one eyed, one horned, flying purple people eater, sure looks strange to me.”

That line got me thinking about what the purple people eater would actually look like. I challenged the kids to think about the song, and the way the creature is described, and then put their vision onto paper. We chose to use crayons for this artwork, as we have a big box of crayons with lots of different colours, including lots of shades of purple.

I got in on the art as well, coming up with my own version of the Purple People Eater. All of the kids had a go, and I was very impressed with their efforts. One of T1’s monsters was carrying a school backpack and was called ‘X’, which I thought was interesting. 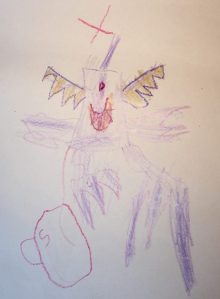 This one was definitely the cutest!