The Twilight Saga is composed of four sequential books exploring the interaction of vampires, werewolves and humans through the eyes of a clumsy, stubborn and rather naive teenage girl. I think this series would appeal to teenagers and adults interested in vampires and the supernatural, or those just looking for something a bit different in the romance line. It follows a fairly predictable course of girl meets boy, they fall in love, they aim to live happily ever after, but I enjoyed the supernatural complications of this story. 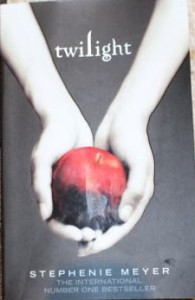 In the first book of the Twilight Saga, we are introduced to Bella, an ordinary, though somewhat clumsy teenager. She has moved from the warmth of Phoenix to the constantly overcast and drizzly town of Forks, where her father is Police Chief Swan. During her first day at her new school her eyes are drawn to five of the most beautiful teenagers she has ever seen, one of which is her biology lab partner, Edward Cullen. He seems to take an instant dislike to Bella, but she is intrigued, and soon becomes obsessed with him. Discovering that he and his family are vampires doesn’t deter Bella from dating Edward. However, she soon finds that not all vampires are as nice as the Cullens, as she is chased from Forks by a vampire that would like to eat her for dinner.

New Moon by Stephenie Meyer, young adult paperback, 497 pages, published by Little, Brown and Company in 2006, this edition published by Atom in 2007.

In the second installment of the Twilight Saga, Bella attends a birthday party at the Cullen’s house that goes dreadfully wrong, resulting in Bella being injured and almost attacked by Edward’s brother, Jasper. When Edward fails to convince Bella of the risks of dating a vampire, he leaves her instead. Bella is destroyed, and spends several months surviving, but forgetting to live, totally consumed by the hole in her chest that Edward’s departure has left her. In an attempt to help her overcome her depression, her father encourages her to spend time with her friends, especially an old family friend, Jacob Black. Bella finds it easy to be with Jacob, and soon they are spending large quantities of time together. Bella is again devastated when Jacob stops talking to her and stays away. Jacob is keeping a secret from her, but why, and what could be so shameful he can’t share it with her?

Eclipse by Stephenie Meyer, young adult paperback, 559 pages, published by Little, Brown and Company in 2007, this edition published by Atom in 2008.

This third book in the Twilight Saga, sees Bella wondering how to have both Edward and Jacob in her life without antagonising the ancient tensions between the vampires and the werewolves. This is complicated by a string of disappearances and deaths in nearby Seattle that might spill over to hurt the Cullens. It appears to be the work of a gang of violent and uncontrollable newborn vampires, but who is creating them and why? Meanwhile Bella is preparing for her high school graduation, and the issue of whether to stay human or allow Carlisle to change her, as Edward refuses to do so until Bella marries him. 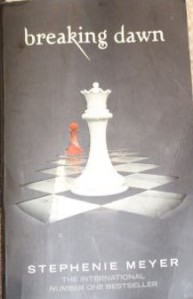 In the final chapter of the Twilight Saga, Bella is still human, and preparing for her life with Edward. They decide to consummate their marriage on their honeymoon, even though Edward thinks he may hurt Bella in the process. The product of such a liaison is a surprise to them both, and may kill Bella or lead to her transformation into a vampire. To Bella it is her baby, but is it really a monster, an abomination that she carries? The child will change all their lives, including Jacob’s, and will bring conflict and danger close to home. The vampires and wolves need an alliance to survive, but still they may not be able to better their enemy, and Alice and Jasper have abandoned them to their fate. Is this the end of the Cullen family?

This series reminded me a lot of the Sookie Stackhouse novels by Charlaine Harris, though Twilight is definitely the junior version, much more suitable for high school students. Twilight contains some violence and sex, but essentially it is a love story. Love between a vampire and a human was bound to be fraught with issues, but Bella and Edward are so devoted to each other, that they will fight hard to stay together. Jacob’s love for Bella complicates matters, and I actually hoped for a lot of the story that Jacob would triumph and win Bella over, as she obviously loves him too. Perhaps I just prefer the idea of spending a mortal life with a warm and loving werewolf, than an eternity with the constant thirst for blood as a vampire, even if it is for love!

I found Edward to be somewhat dislikable, with his controlling ways, and his tendency to keep secrets from Bella in the guise of protecting her. This makes their relationship uneven, and I think truth is always better, so that decisions can be made together. Edward is rather resistant to this idea, and even goes to the lengths of having his sister kidnap Bella and keep her hostage while is is off on a hunting trip. Protection is one thing, but such overt control dismayed me, along with her inability to be angry with him when he returned. I also found him to be arrogant and smug. His attitude improved through the story, but I had already formed a dislike for him, while championing Jacob. Though Jacob has his own problems, with his adjustment to discovering his werewolf side, and the whole ‘mortal enemies’ thing with the vampires, he really just wants Bella to be happy. He loves and respects her, and will be there for her, even when it’s not in his best interests. I liked his fierce devotion and his honesty with Bella. I felt like he deserved to have Bella’s whole love in return. This story made me think of that saying ‘nice guys finish last’.

Bella is a complicated character. In some ways she is strong, when accepting that she has fallen for a vampire, and that her best friend is a werewolf. Yet, then she shows a weakness by being unable to live when Edward leaves her, and just forgives him easily despite how his actions have hurt her. I know we should all forgive, especially those that we love, but I wanted her to be a bit stronger in making him understand how his actions were inappropriate, and how they made her feel. Then I remember that she is only eighteen for most of the story, and she has little in the way of experience in relationships. I also found her intense desire to become a vampire baffling, when it would mean leaving her parents behind, whom she loves and is close to. I was pleased that by the end of the story she had become more than just Edward’s girl, as she discovers her own identity and her own strengths.

This series is not high brow literature, but they are entertaining and I found them to be an engaging read. The plot was somewhat predictable, though fairly well developed. My biggest complaint was that I got a bit tired of hearing about how beautiful and perfect Edward is! I was also a bit disappointed that there wasn’t more action of the vampire fighting kind, especially in Breaking Dawn. There was a lot about sexual desire and allusions to sex, but no actual sex scenes, which surprised me. The whole series was actually pretty clean with no foul language and no explicit scenes, just innuendo and plenty of kissing. Along with the dearth of vivid vampire killing, this does make it better for younger readers. Overall the Twilight Saga is a likable series of books to relax with.