Book Week was last week and the girls dressed up for a parade at school. They both took a long time to decide on who they wanted to dress up as this year. There were various fairies to consider, Grug, the witch from Room on the Broom, Thelma the Unicorn…. Finally A decided to be Lauren the Puppy Fairy from the Rainbow Magic Fairy books by Daisy Meadows, and L chose to be Esau from Esau the Paw by Chris Gurney and John Bennett.

A as Lauren the Puppy Fairy.

A’s costume was easy. We just went through her drawers and came up with some pink cord pants, pink shoes, a pink singlet and pink fairy wings from the dress up box and she was done. She used a pink pencil with a gem on the end of it for a wand, and took one of her toy puppies along too.

L’s costume needed a bit more work. Esau is a very furry cat that needs to be shaved because his fur becomes matted. L vacillated between wanting to be Esau prior to the shaving, directly after or when the fur was beginning to grow back. She eventually decided on the latter, wearing grey shorts and a furry hoodie with joggers. I made her a skinny grey tail with a big fluffy end from yarn, and used the same yarn to create a headband with fluffy, grey cat ears on it. I attached a loop of thick elastic to the tail so that L could wear it around her waist comfortably. To finish her outfit, we used face crayons to give her face more of a catty feel.

They both had a fun time at the parade. We like dressing up for Book Week! 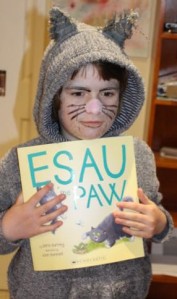 L as Esau the Paw.