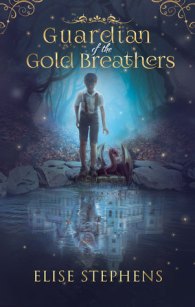 Guardian of the Gold Breathers by Elise Stephens, e-book, 176 pages, published by Updrift in 2015.

After Liam’s father dies, his life begins to change, culminating in his mother remarrying and them leaving Dublin behind for a house in the country with his new step-father, Dr Parker. Liam is unhappy about these changes, but at least he meets some interesting people at the new house; the housekeeper Hannah and the gardener Michael. Liam is led to a dragon egg, and Michael instructs him on how to hatch it. Then Liam is set on a path to prove who he is and to help a distant fairytale kingdom right the wrongs of the past.

Guardian of the Gold Breathers is a lovely, though sometimes sad, fantasy novel. Fairies, goblins, and even a troll are brought to life as Liam learns about the real fairy stories.

The story felt a little familiar; lonely boy discovers he is something more, passes trials to prove himself, fulfils destiny. Still, it was well written and entertaining, and I enjoyed it. I liked the old tale of the Guardian and the Prince, and the idea that somewhere dragons and men once lived happily side by side.

Michael was an especially intriguing character, surrounded by much mystery. He was my favourite, though I also liked Liam and Hannah. Liam had a lot going on in his life, and I think he would have really suffered had he not met Hannah and Michael when he did. I mostly felt sorry for his mum, marrying Dr Parker because he could provide for them. Dr Parker I disliked quite a lot. His scientific work using live dogs was awful, but I also hated the way he treated Liam. He was insensitive to the boy’s feelings whilst being derisive of Liam’s love for reading and map making. Dr Parker didn’t even try to listen or understand Liam.

As Guardian of the Gold Breathers is under 200 pages, it would be suitable for slower readers interested in fantasy, who might otherwise be daunted by a longer book. It’s also great for kids who like fairy tales and dragons.

Guardian of the Gold Breathers is most suitable for middle and upper primary school children.