Edward visits Hawthorne Farm for the first time. His uncle, aunt and cousin show him how to help about the farm, by collecting eggs, feeding the pigs, painting the barn, and herding the sheep. The fact that Edward and his family are dogs running a farm is only the first of many odd things at Hawthorne Farm!

Funny Farm is a simple story of a day on the farm, just that the farm is a little different to most. The text was clear and easy to read, with just one sentence per scene; great for younger children. Each page was full of colourful and detailed illustrations full of interesting and unusual things.

My preschoolers thought Funny Farm was pretty good. They liked all the strange things, such as the pigs playing on the swings, the bugs ploughing their own small field, and the sheep brushing their teeth at the water trough. They laughed quite a lot when Edward got chased by the rooster and when he fell into the pig’s food trough! They are keen to read this book again.

Funny Farm is suitable for toddlers and preschoolers. 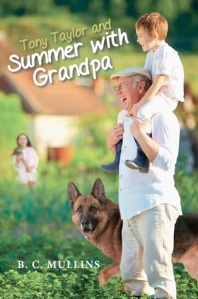 Tony spends his summers on his grandparents’ farm. He loves every moment of it, as he explores, fishes and helps out with the chores. His Grandpa’s dog, Skippy, is his constant companion. He’s not so keen on the early mornings, but he does like to walk down along the stream. It is here that he meets a little girl picking wildflowers. Tony wonders who she is and where she comes from.

An easy to follow story with largish text and short chapters make this book great for kids learning to read independently. The subject matter will be enjoyable for a broad range of children.

Tony is an average kid, ready to explore and adventure. I liked him well enough, and his grandparents are nice. I liked the simple story, which is mostly realistic and contemporary. However, there is a hint of magic on the farm! The story seemed to end a little suddenly, yet it still felt adequately completed. Now I’m wondering what adventures Tony will go on next!

Tony Taylor and Summer With Grandpa is suitable for lower to middle primary school children. Older reluctant readers might also enjoy this tale. Overall this was a nice chapter book that I will happily give to my first grader to read.

*I received this book from the author, who asked me for an honest review of this book. I did not receive any other remuneration, and the review is composed entirely of my own opinions.

Kate’s father is missing. He went up in a light plane with a friend, and they haven’t been seen since. They live is a mountainous and bushy area by a lake, so the only way to search for the plane and its occupants is by air. Kate and her sister, Madeline, are both hoping their Dad will be found soon, and they have been lighting a lamp and building a stone man to help guide him home. While they are up at Kate’s hut on the hillside, a strange boy appears. Troy seems sad, evasive and a bit irritating, but Kate comes to like him. While she waits for news of her Dad, she also wonders more about who Troy is and why he is there.

The style of Tussock was nice, and the story flowed well. I really liked the side story concerning the keys on the old rusty key ring that Kate’s Dad had given her when he passed the hut to her. These short anecdotes were interesting and more insightful than the rest of the story. I would have liked to read more of the stories behind the keys.

However, overall, this story just didn’t hit the spot for me, it didn’t pull me in and keep me engaged. There was too much left unanswered. What happened on that last night? What happened to Troy? Where did he come from, where did he go? I was even asking myself questions about how they met in the first place. I would have thought that finding a strange teenager lurking about on her farm would have been out of the ordinary. Despite her concerns about her father’s fate, surely Kate would have told her mother that there was someone trespassing, since she wasn’t aware of the boot camp at that point, and she didn’t know what he was up to. They obviously lived far enough from town that a random stranger wouldn’t just stumble along, and someone there to help with the search wouldn’t be wandering aimlessly by themselves over their property. Perhaps her lack of judgement is due to the stressful situation she is in, but still, I would have thought her instinct would have been to protect her younger sister at least. Kate barely seems suspicious, and is only mildly irritated that he won’t answer her questions directly.

Kate and Troy were the main characters, yet there wasn’t a lot about Troy. He was a fleeting figure, here, and then gone, with only the briefest explanation for his presence and strange behaviour. Really, Kate and Troy were ships passing in the night during a time of distress for each of them, but there could have been a lot more to their relationship. To me Troy was a bit of a shadowy character that I couldn’t visualise that well. In fact, none of the characters really spoke to me, though I found Kate and Madeline likable enough.

Banjo is a chook dog. It is his job to round up the chooks and get them into their pen to be shut in for the night. He barks and chickens come from all over, except Ruby Red, who sits on the wood heap and ignores Banjo. When Ruby Red falls ill, Banjo finds her and cares for her during her recovery.

Gorgeously illustrated, this story of a wayward and head strong chook and her diligent round-up dog, is both moving and funny. I liked the barking and the squarking, with chooks flying everywhere, it reminded me of the chook yard my grandparents had when I was a child. My preschooler liked that Ruby Red ignores Banjo until he topples the wood pile, this made her laugh. I think she saw herself in Ruby Red, stubborn and resistant til the last! My second grader liked Banjo, and how he cared for Ruby Red when she was sick, even though she had antagonised him in the past. Friendship and love can conquer all.

* Banjo and Ruby Red was an honour book for the 2014 Children’s Book Council of Australia Book of the Year in the Early Childhood category.