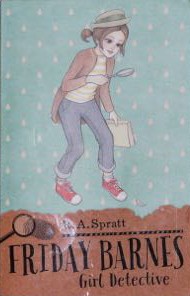 Friday Barnes Girl Detective is a new series from R. A. Spratt, the creator of the Nanny Piggins series. The story follows Friday Barnes, a rather unusual eleven year old, with an uncanny ability of solving mysteries. She is the youngest daughter of two academics who have not the time nor the inclination to provide their genius daughter with the emotional support and attention that most children experience. They are just a little too preoccupied with their work, which has left Friday to to do much as she pleases. As she mostly likes to learn, experiment and observe, she doesn’t usually get up to too much mischief. After Friday solves a bank robbery case, she uses the reward money to enrol herself at Highcrest Academy, the most exclusive boarding school in the country. As soon as she arrives, Friday realises that beneath the school’s veneer of respectability are mysterious occurrences, learning competitiveness and general rich-kid hi-jinks. She quickly finds herself solving cases of missing homework and false accusations, dealing with a boy in her class who inexplicably appears to hate her, and most interesting of all, the Yeti that has made a home for itself in the school’s swamp.

Friday is a very interesting character. She is intelligent, precocious, peculiar, observant, and yet lacks the ability to correctly decipher social cues, and she dresses terribly! She reminds me a lot of that great and strange detective, Sherlock Holmes, who has been a favourite of mine since childhood. This young detective has definitely got me interested. I was reading this book to my third grader, a few chapters each day, except she liked Friday Barnes so much she sneakily read the rest of it without me!

All the characters were well written, and easily conjured in the imagination. I quite liked Friday’s best friend, the airy Melanie, who fulfilled the faithful sidekick role so well. And of course, our hero must have an arch nemesis, in this case, Ian Wainscott, who has a penchant for mean pranks and snide remarks.

As Friday is a genius this book contained some advanced language and terms that my third grader had not run across previously, mostly regarding her abilities in maths and science. I explained these terms, but they seemed mostly to serve the point of Friday’s extreme intelligence rather than to progress the story, and as such their inclusion did not lessen the enjoyment my third grader gained from the book. She quite happily devoured the story as it should be taken, with great enthusiasm and intrigue.

Suitable for children in middle primary school through to lower high school, Friday Barnes Girl Detective is the start of a great series, sure to entertain young mystery fans. We are now eagerly anticipating reading the second book in the series, Friday Barnes Under Suspicion, which has been recently released in Australia.

Join 323 other followers
Follow Today We Did on WordPress.com