The Dead Girls of Hysteria Hall by Katie Alender, paperback novel, 329 pages, published by Scholastic in 2015.

When Delia’s distant aunt dies and leaves her an old house, her family is surprised to discover that it is actually a mansion previously used as a mental asylum. Delia’s parents had planned to do it up over the summer prior to selling it, despite their daughter’s protests. Neither Delia nor Janie want to be stuck in the middle of nowhere in a creepy old house, but that’s about all they can agree on. When some strange things begin to happen to Delia, she decides to leave, even if her parents refuse to go too. Except, the house won’t let her leave…

This was a ghost story told from the perspective of the ghost. It wasn’t as scary as I had thought it would be, but it was still interesting. It delivered a few turns I wasn’t expecting, and it pushed at my preconceived notions of ghosts. I’ve always thought of ghost time as passing much the same way as real time passes, so I was intrigued by the idea that time could slow or speed up for the ghosts in this story. When months or even years can pass within a few breaths, it would certainly reduce the likelihood of boredom during a haunting, especially when so few people visit the old asylum. The fact that the ghosts could learn to manipulate their surrounds, such as picking up small objects or opening doors, yet they could also walk through walls, and be hurt, was quite interesting.

The house is really creepy, with it’s abandoned rooms, old leather restraints and eerie corridors. And that’s before you know for sure that it is haunted and that an evil force has overtaken the building! I liked the descriptive qualities of the writing, particularly the way the ghosts were described. The ghosts came alive for me (no pun intended!), especially Florence and Eliza.

The story itself was compelling, and kept me reading fairly swiftly. I really wanted to know what would happen to Delia, and to the house and its ghostly inhabitants. It was a good length for a teen novel. It also wasn’t too complicated or frightening, so younger teens could also enjoy it. The Dead Girls of Hysteria Hall was different to other ghostly novels I’ve read, in a good way, and I enjoyed reading it.

The Dead Girls of Hysteria Hall is suitable for high school students. Fans of horror and ghost stories should enjoy this journey into the world after death.

Ninja Steve lives in Ninjastoria, where everyone wears masks and ghosts are real. He is an average student that keeps getting compared to his genius older sister. Apart from his swordsmanship, he really isn’t living up to her standards! In another land, Agent Darcy is a student at the Bureau of Sneakery, where she is one of the top students. When Agent Darcy and her rival, Agent Serena, are sent on a student exchange to Ninjastoria, they have to work together to complete their mission. They pull Ninja Steve and his best friend, Samurai Sam, into their game, getting them all into serious trouble. Will they be able to make things right?

A book that combines ninjas and spies, of course my expectations were high, and I have not been disappointed! Agent Darcy and Ninja Steve in Tiger Trouble is funny, action packed and engaging. The story was easy to read, flowing nicely between the two perspectives of Agent Darcy and Ninja Steve. I read the whole book in one day, as I couldn’t sleep without knowing what happened, so I got up and finished reading it! The action sequences were exciting, and I enjoyed learning about the world that has been created for the story. The Maze of Mirrors sounds horrible, but I wouldn’t mind a Field of Tall Purple Grass (as long as there are no snakes of course). I also enjoyed the puns throughout the story, gave me plenty of giggles.

I really liked Ninja Steve and Agent Darcy. Even though they are still young, Darcy and Steve are able to show maturity and dedication in their professions when required. They are kind, loyal and willing to help others. At first, I didn’t like Ninja Nora or Agent Serena much, but they grew on me through the story. Serena and Nora are quite similar, both are very clever and good at their jobs, but with that comes a lot of arrogance. Serena taunts Darcy and Nora is rather mean to Steve at times, but when trouble arrives, both girls show fierce loyalty towards their companions.

This book is suitable for middle primary school to lower high school students. I believe it is only the first in an upcoming series following Ninja Steve’s and Agent Darcy’s adventures. I am looking forward to another trip to Ninjastoria soon!

*I received this book from the author, who asked me for an honest review of this book. I did not receive any other remuneration, and the review is composed entirely of my own opinions. 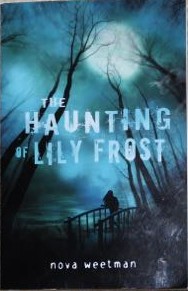 The Haunting of Lily Frost by Nova Weetman, paperback novel, 230 pages, published by University of Queensland Press in 2014.

When Melbourne teenager Lily Frost discovers her parents have decided to suddenly move the family to a small country town two hours out of the city, she is very upset. When she sees the house that her parents have bought in the little town of Gideon, she is even less impressed. It is a large house, but it’s big and spooky, and the attic room seems to be calling her. Lily is ripped away from her safe city life with her best friend, Ruby, and finds herself making friends with a cute boy, Danny, and being haunted by the ghost of a missing girl. Tilly, who disappeared nine months before is trying to tell Lily something, but will anyone believe her, or is she imagining it all?

The Haunting of Lily Frost wasn’t terrifying, but there were some creepy scenes. Reading about the attic room in the big old house, I got a bit of a shiver. The house that I conjured up looked extremely scary, with huge gaping eye windows and a screaming door mouth. Okay, I’ve probably read a few too many spooky house stories, but what can I say, I love them! Also I was reading this book late at night, with only my reading lamp, which added to the atmosphere. All ghost stories should be read at night for the full effect!

As a character, Lily was a little pouty and selfish, but I am seeing her as her parents would see her. For a teenager, I think she was well described and developed, along with the other teenage characters. Danny and his twin sister Julia were interesting characters. Julia was so bitter and mean and very catty towards Lily, without any possible cause, which I think is all too common in high school. Danny was extremely different to his sister, he was sweet and welcoming, though he wasn’t entirely altruistic, he wanted a friend outside of the small group of narrow-minded individuals already attending the school in Gideon. Lily was not used to making friends easily, and this made her wary of Danny’s initial overtures of friendship. These felt like normal and real teenage interactions, which really helped to enliven the story. I also liked Lily’s  little brother, Max, so easy going and a bit of a snitch, just as I imagine younger brothers to be. The teenager angst angle, was good, with Lily’s and Ruby’s relationship and how they interact when separated. How the relationship fared once complicated by boy issues, including Ruby’s reactions to Lily’s jealousy and selfishness had a ring of truth, and assisted in developing the characters even further. The reader was really able to know the characters.

The Haunting of Lily Frost was a fairly standard ghost story suitable for upper primary school and high school children. It contained all the important elements, such as suddenly cold air, moving objects, mystery and the sensation of being touched by something that cannot be seen. Still, I found myself eager to discover what had happened to Tilly, which kept me turning pages. The plot would thicken at just the right moments, and some of the chapters left me hanging, forcing me to read ‘just one more chapter…’. As the story progressed, the tension built, leaving me wondering if Lily was actually losing it. Overall I liked this book, it was very entertaining. I think that children and teenagers interested in ghost stories and mysteries should definitely try it (possibly at night by torchlight!) 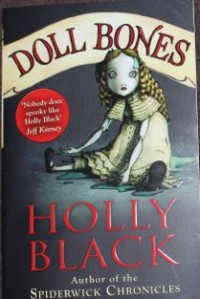 Doll Bones by Holly Black, paperback novel, 244 pages, first published by Doubleday in 2013, this edition published by Corgi in 2014.

Best friends, Zach, Alice and Poppy have made up a fantastical world that they play out with dolls and figurines. The Queen in this world is a very old, fine bone china doll, that is kept displayed behind glass at Poppy’s house. When Zach unexpectedly refuses to play the game any more, Poppy and Alice remove the Queen from the cabinet, discovering that she is full of what appears to be some ashes. Poppy dreams that the Queen was really a girl called Eleanor Kercher who died in 1895, and she wants Poppy to return her to her grave. This quest leads Poppy, Alice and Zach on an interstate adventure, as they try to placate Eleanor, and fulfill her last desire.

Doll Bones is an adventure ghost story, and it is also a coming of age story. Zach, Poppy and Alice are pre-teens still playing out the fantasy game of their childhood. Becoming haunted by the spirit of a lost and angry little girl trapped inside a doll, is the last true adventure of their childhood, as they move towards more teenagerish past-times. They embark on an epic quest into regions unknown in the middle of the night by themselves, vastly unprepared for such a journey. Add in a creepy doll, vivid dreams, unexplained occurences and misadventures, and you have a spooky tale indeed.

This would be a good book for middle and upper primary school students to read, especially those that like a good ghost story. I thought the story was okay, but nothing spectacular. It was an easy read, and interesting enough, but I didn’t find it gripping. I am putting that down to the fact that as an adult I like a good horror or mystery story, and spooky stories for children just aren’t spooky enough for me! Having said that, I always take photos of the books I review to add to the post, and I took photos of this book, transferred them to the computer, but when I went to add one to this review, the photos were all blank! That’s a little creepy coincidence…

I hope that my second grader will give Doll Bones a read so I can get a true child’s perspective on the story. The story did flow well, and the character’s personalities really came through from the story, so it was a good book that I think many children would enjoy.