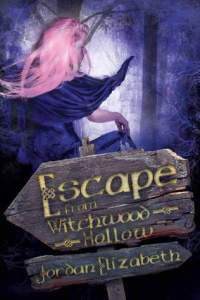 After her parents are killed in the terror attacks of 9/11, Honoria moves to the rural town, Arnn, with her brother, aunt and uncle. The town is bordered by a forest, known as Witchwood Hollow. Over the years many people have wandered into the woods never to return. The legend of the witch is well known about town. Soon after arrival, Honoria is introduced to the woods by a couple of kids from her new school, but instead of being afraid, she finds a kind of peace among the trees. Could the witch help her reunite with her parents or will she become trapped forever?

Escape from Witchwood Hollow was an easy and fast read which I really enjoyed. The story was appealing and intriguing, while the characters were interesting and well-written. There was an undertone of sadness throughout the story, with many of the characters experiencing the loss of a loved one, or being lost themselves.

This book is not about witchcraft per se, it is more about historical occurrences becoming an urban myth, and the way that such a myth is regarded by locals and newcomers to the area. The story centres on Honoria, and her experiences in Arnn and the woods in 2001. However, it is also about Lady Clifford, an immigrant new to the Arnn area during the 1600s, and another English immigrant, Albertine, who arrives in Arnn in 1850. Both of whom entered the woods never to return. I liked the way the story spanned across and entwined the stories and times of the three young women.

I felt sorry for Honoria, given the tragic loss of her parents. Her behaviour felt realistic for the situation. Something good for Honoria from the move to Arnn was her burgeoning friendship with her neighbour, Leon. Proximity brought them together, but a shared interest in local history and the legend of Witchwood Hollow strengthened their bond. I really liked everything about Leon, he was my favourite character.

Something I found a little odd in the story was the obsession with clothing brands. It was weird, and completely redundant to the story, so why emphasise their fashion choices?

Escape from Witchwood Hollow is suitable for upper primary and high school students and is perfect for fantasy lovers.