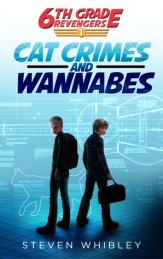 Jared and his best friend Marcus style themselves as The Revengers; a team that takes care of problems in their community. Their first task is to rid the Oak Street neighbourhood of a crazy and evil cat that is ruling the street with his claws and teeth. They also have to do something about Gunner, Jared’s sister’s boyfriend and wannabe pop star. He just hangs about Jared’s house pretending to write music and loafing off Ronie (Jared’s sister). The boys are going to have to be creative to solve these problems, and prove themselves as a team that gets things done.

An easy and quick read, Cat Crimes and Wannabes was entertaining and amusing. There were occasional black and white illustrations among the text, and the chapters were fairly short, good for reluctant readers.

The first chapter was a very clever way to begin the story, introducing Jared and his family. I enjoyed reading about Jared and Marcus and their new business. I especially liked their efforts to banish the evil cat. That was one scary cat! So vicious and aggressive, it was more like a small tiger than a house cat. Jared and Marcus really underestimated how difficult removing such a cat would be, but their efforts were funny.  While Gunner wasn’t dangerous like the cat, he was still an annoying presence who I disliked greatly. The boys’ plan to remove Gunner from their lives was ingenious, and much nicer than things I thought of to do to him!

This is the first book in a series following The Revengers. I had a moment of disappointment when the story finished, as I was expecting it to be longer based on the page count. Instead there was a preview for the next book in the series at the end , and now I want to read that one too!

Cat Crimes and Wannabes is most suitable for middle and upper primary school children into lower high school. 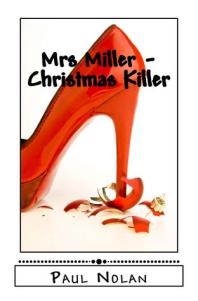 Holly Glover is starting at a new school at the start of December. She finds it strange that there are no Christmas decorations up, and the school is so quiet, with none of the usual childish banter and laughter. She soon discovers that the Head Teacher, Mrs Miller, hates christmas to the point where it has been banned at the school. Mrs Miller terrorises the teachers and students alike, and immediately takes a dislike to Holly. Can Holly bring Christmas back to Mount Pleasant Middle School?

This Christmas themed short novel was a fun read that I finished in one sitting. The story had a funny side, especially when Holly’s Dad was around, though there’s nothing funny about the despotic nature of Mrs Miller’s rule of the school.  I would not have liked being a student under her reign! It also hit on some more serious matters, like making new friends, death, and supporting your loved ones so they don’t feel hurt.

The characters were well-written. I liked Holly and her new friends, Meera and Chris. Mrs Miller is very scary, and I can see why no one wants to cross her. I liked the way that she was contrasted against her deputy, Mr Castle. Holly’s father seems somewhat eccentric. Everything he does is humorous for everyone except Holly, who finds his behaviour utterly mortifying. Between his terrible spray tan business, clothing choices, belchy old van, and his obliviousness to Holly’s embarrassment, Mr Glover tops the list of most embarrassing Dads. I feel a bit sorry for Holly, since she has to endure such embarrassment at a new school, but he’s her Dad, he loves her, and he doesn’t mean to embarrass her. I love that two of the teachers at Holly’s school are called Miss Meek and Mr Mild!

Mrs Miller – Christmas Killer is suitable for middle and upper primary school students. I enjoyed it, it’s a good story to read before Christmas.