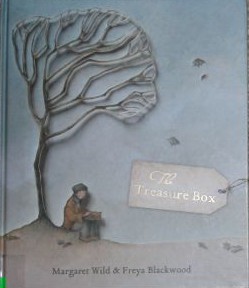 The Treasure Box by Margaret Wild and illustrated by Freya Blackwood, hardback picture book, published by Penguin Group (Australia) in 2013.

Peter and his father are forced to flee their home during the war. They take with them a book in a small iron box. This book is special to Peter’s father, and is the last remaining book after the local library was bombed. The road to safety is long , cold and arduous. When Peter’s father dies, he struggles on, taking the box with him, but when he can go no further, he buries the box beneath a tree. Peter escapes with his life, but he never forgets the iron box holding the treasured book.

The Treasure Box is a poignant story of war, death and loss. Peter loses everything he has ever known, yet he never forgets his father, his home or the treasured book. Some things are more important than gold, silver and rubies. Peter’s book is about his people, the people that were persecuted and forced from their homes, it is an important part of their history. When everything is lost, we still have our history and our memories. The Treasure Box reminds us of the importance of the written word and of history, which can help shape the future for the better.

The illustrations in The Treasure Box were perfectly matched to the story, creating just the right tone as the story progresses. Using subtle shadowing made some of the pictures appear to rise from the page, or created a looking-through-a-window effect. I also liked that some of the pages had parts made up of ripped texts, as if they had been made from the bombed library books.

This is a thought-provoking read for both young and old, and I found it incredibly sad. My preschooler and second grader were shocked when Peter’s father died, and the refugees buried him by the side of the road. They have never been exposed to war or its consequences, and this book was a real eye-opener. They asked a lot of questions, many of which I could not answer. They wanted to know why anyone would go to war, why they would force people to leave their homes, why they would bomb innocent people, why they would kill children, and how can we stop war. I wish I knew the answers and the solutions, and I wish no one had to endure the atrocities of war. The Treasure Box gave us a sorrowfully beautiful, age appropriate and heartfelt opening to discuss this very complicated and saddening topic.