Spine Chillers by Q.L Pearce is a collection of spooky short stories. Are you brave enough to read them after dark?

In the house on Beech Street a terrible tragedy occurred. Now neighbors won’t look at the place as they pass. Those who live nearby draw their blinds and shutter their windows after dark. What are they afraid of?
Hale Hallow Woods seems sinister and menacing even in the light of day. Does a thirst for revenge beat near its dark heart?
The answers lie within these pages, just waiting to send a chill up your spine!

And a little about the author…

Q.L.Pearce is the author of more than 120 books for young readers, from picture books to YA, as well as film tie-in books. Her works have received several awards including a Carter G. Woodson Book Award gold medal from NCSS and a Moonbeam Children’s Book Award gold medal. Her fiction includes the popular middle grade series, Scary Stories for Sleep-Overs (Price, Stern, Sloan). Q believes strongly in the value of scary books for young readers. When asked what credentials she has which qualify her as an expert in this area she replies, “I was a child once. That was very scary.”

And now for a little taste of Spine Chillers.

Jason stepped inside. The air within was tainted with an odor that made him gag.

“What is that smell?” he asked putting his hand to his face.

“Do you know the story of the Carlson’s?” The woman didn’t wait for an answer before she continued. “They were a typical family. The little girl, Anisa, took ballet lessons. The boy, Junior, played baseball. Some people said he had the talent to go far as an athlete … that is … if he’d lived.”

The group entered the kitchen. The table was set for five as if the family would be sitting down for breakfast any minute. Jason noticed a pitcher’s mitt on one of the chairs.

“He was a lefty,” he said to no one in particular.

“Mr. Carlson’s mother slept in the spare room. She was an invalid and needed a lot of care. Mr. Carlson and his wife had quarreled about it that fateful morning and he’d left early. When he came home he found his wife in that very chair.” She pointed to the one at the end of the table. “He’d brought her flowers and wanted to apologize. It took him a few moments to realize she was dead. It seems she had taken a handful of sleeping pills with her tea. The police found the rest of the family in the basement along with a cracked, bloody baseball bat.”

“What happened to the dad?” Mike asked.

“They found him two days later hanging from the tree in the backyard. He’d left a note that said he wasn’t alone in the house. The neighbors claimed they heard noises late at night … screaming. You’ll notice that the houses on both sides are now empty. No one wants to live near this place.” She paused and looked in the direction of the front entrance. “Sometimes I can’t wait to leave.”

Motioning for the boys to follow, the woman moved from the kitchen into a dimly lit hallway. She opened the first door on the left. “This was the grandmother’s room.” Jason was hit with a wave of a smell like rotting fish.

The Roller Grille was the real deal. An authentic drive-in restaurant with car hops on roller skates delivering trays of burgers and fries to people parked outside. It had been in business for decades. Other than a fresh coat of paint now and then it hadn’t changed from the day it opened.

Tyler, Andy and Jacob threaded around the cars and pushed through the glass doors to the diner. A hostess dressed in a fuzzy sweater and a poodle skirt guided customers to booths covered in red vinyl. A candy-colored jukebox blared from a corner. The laughter and chatter of the crowd was louder than the music. Tyler noticed Shay jammed into a booth with her friends. He raised a hand in greeting but she ignored him.

Andy pointed to the long soda fountain. “There’s room over there.” Tyler nodded and they each claimed a stool.

“What’ll it be?” Randy, the soda jerk adjusted his black bow tie and gave them a toothy grin. The boys ordered shakes.

Andy whirled around once on his stool and stopped to face Jacob. “So do they have any place like this in Phoenix?”

“No. This is pretty cool.” He looked around and his eye settled on a wall of photographs. “Who are those people?”

“Those are the prom kings and queens from the high school,” Tyler answered.

“Wow there’s like a hundred of them. What’s the deal with those two?” Jacob pointed to a black and white photo that was larger than the rest.

Tyler slipped into telling the story that everyone in town knew by heart. “That’s Johnny Tonnarro and his girlfriend, Samantha. He was like a rock star a long time ago. He got killed in an accident off Yetter Point.”

“It was a foggy night. He drove his car off the cliff and got squished like a pancake,” Andy added. “His girlfriend waited for hours in the cold for him to show up. She was all dressed for the prom and crying like a baby.”

Jacob gazed at Samantha’s sweet face. “That’s sad. What happened to her?”

Tyler lowered his voice for effect. “She drowned a year later on the anniversary of the accident. She was down on the jetty throwing flowers out into the ocean, those stinky white ones…gardenias. A wave swept her off the rock. Some people say they’ve seen her.”

Andy took up the story again. “Every year around this time her ghost waits out on Thorne Road near Highway One for Johnny to pick her up. Just standing there crying.”

Randy placed the shakes in front of the boys and joined in. “This time of year the evenings are usually foggy,” “They say she waits just off the edge of the road in the mist – lavender gown, white gloves, and gardenias in her long, blonde hair.”

Taylor and Andy couldn’t hold back their laughter. “Nobody’s seen her,” Andy snickered. “It’s all made up. Not the accident part but the ghost part.

“Oh, yeah. She died alright. She drowned. But only little kids and tourists swallow the ghost story. You have to be a real lamebrain to believe it. Last year the town newspaper offered a ten thousand dollar reward for anybody who could get a photograph of her. There were a lot of fakes but nobody’s earned the money yet.”

Still grinning, Tyler turned to take a sip of his milkshake and caught a glimpse of Shay. She was staring toward the entrance. If looks could kill, her eyes were lethal weapons. Tyler followed her gaze.

“Uh oh,” he whispered and his smile faded. His brother was holding the door open for Anilla Jacoby, Shay’s arch-enemy. Anilla beamed up at Lane and slipped her arm through his. The couple slid into a booth. Shay stood and stormed toward the door without looking at them.

A moment later his phone beeped. He read the text. Come outside now. We need to talk. Shay was waiting for him as he pushed open the door.

“I thought I would die of embarrassment. I can’t believe he would show up here in front of everyone with that airhead hanging on him like that. Now I know why he’s been avoiding me.” She turned on Tyler. “How long has this been going on?”

“Don’t ask me. This is the first time I’ve seen him with Anilla.”

“He needs to pay a price for humiliating me like that. I want to embarrass him in front of all of his friends!”

“I’m not going to let this go, Tyler.” She leaned in and growled. “You’re with me or against me. And trust me, if you want to survive high school you don’t want to be against me. I can make your life miserable.” Shay turned and stomped away.

I love the world of children’s literature. Over the years I have written picture books, activity books, middle grade, YA, biographies, and nonfiction. My favourite genre is scary short stories for middle grade and YA. Picture book author, Mem Fox, once said, “Writing for children is like writing War and Peace in haiku.” I think that’s hilarious but true. A short story obliges the writer to develop characters and plot concisely, while still telling a tale that is fun to read.

When writing a scary story I’m careful to choose a theme that young readers can relate to, and to frame it from a child’s point of view. I usually begin by sketching out the plot beginning to end. Rules can always be bent, but in general, a short story has the typical structure of any work of fiction including the opening, conflict, rising action, climax and resolution, all in about 2500 words or less. The first step is to get everything on paper. The next step is to craft it.

Author Kurt Vonnegut suggested that a short story should begin as close to the end as possible. That’s good advice. A long, drawn out opening won’t hook a reader. The first line should immediately invite the child to enter the world in which the story takes place. Because economy of words is a plus, my goal is to use the most effective language to create the tone and mood quickly. In most scary tales the setting is a character in itself, but I try to find ways to show it without lengthy description.

Each sentence should move the action forward or reveal something about the characters. Still, short doesn’t mean simplistic. It’s essential to give the character a good reason to go into the creepy basement or sneak out to the amusement park at night! If his or her behaviour isn’t believable then the story won’t ring true. For young readers, the main character should succeed or not based on their own choices and decisions. No fair having someone or something else rescue them at the last moment.

Finally, good writing is rewriting so the last stage of crafting a short story is editing. This is the time to be certain that every sentence serves a purpose and every word is as precise as possible to deliver the spooky thrills and chills the reader is anticipating!

About the Author: Q.L. Pearce is the author of over 150 books for children, including YA and Middle Grade fiction and non-fiction. She specialises in scary stories, which is evident in her hit series Scary Stories for Sleep-Overs. She has won numerous awards for her work, including the Carter G. Woodson gold medal and the Moonbeam Children’s Book Award. Her multi-award winning book, Red Bird Sings received praise from Publisher’s Weekly, the School Library Journal, and the Library Media Connection.

Find out more about Q.L. on her 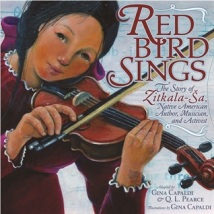