On a cold winter’s afternoon we pulled out our tub and filled it with red objects to create a sensory tub for the boys. We had some straws, toy trains and a firetruck, tongs, a funnel and cup, pom poms and mittens. 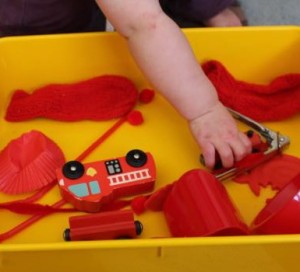 Going straight for the train!

We explored the different textures of items within the tub. T1 kept putting the pom poms in his mouth, so I removed them before them could be swallowed! He also enjoyed touching the pipe cleaners and blowing through the straws. T2 liked the mittens, and rubbed them all over his face. He also tried putting them on his hands, and his feet.

Trying to pick up the train with the tongs.

They both loved playing with the trains and the firetruck. T2 tried to use the tongs to pick some of the other objects up, but without much success. 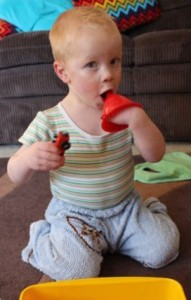 T1 used the funnel to make music by blowing through it like a horn. He also threaded one of the pipe cleaners through the funnel a number of times.

Throughout the fun, we talked about the colour red, and I encouraged them to say it. I pointed out other things around the room that were red, and asked them if they knew anything else that was red. They both became very excited when I started talking about red fruits, such as strawberries, apples and raspberries. We had to go for a snack after that! 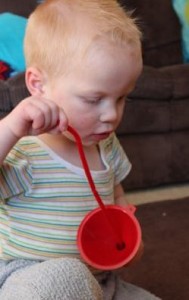