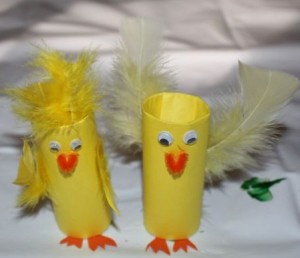 Gluing on the yellow paper.

The roll covered in paper. The edges have been folded into the roll.

I cut out some feet shapes from orange cardboard and the kids added them to the base of their rolls. Each foot had a little tab of cardboard folded up and glued on the inside of the roll. L and A added googly eyes and the beaks were made from a small piece of pipe cleaner folded into a little triangle and glued onto the roll.

L cut down some yellow feathers to the size she wanted, and placed them on the sides of her chick for wings. She also glued a small piece of feather to the back as a tail. A cut up feathers to use on her chick too. She added wings, a tail, and some hair to her chick. Both chicks are really cute.

The back of L’s chick.

Showing the placement of feathers on A’s chick.