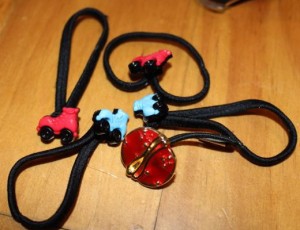 A found some cute buttons in our button collection, including some really cool roller skate buttons. She wanted to wear them in her hair, so we had a go at making them into hair bands.

The roller skate buttons had reasonably large loops on the back, so it was easy to pass the folded hairband through the loop. The other buttons had smaller loops, so I had to find some little bands, and it was more fiddly to get the band through.

Band through the button loop.

Bands tied through the loops.

Once the band was through, I looped one end through the other and tightened the band. I also added a spot of hot glue to the bands on the back of the each button so that the band was held in place.

A was very pleased with her new hair bands, and immediately wanted one in her hair. 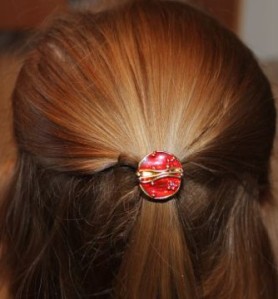