Over the last few months we have been collecting cardboard boxes instead of recycling them straight away. There were also a number of box construction items that had come home from school, and were added to the pile for re-purposing. The pile of boxes grew and grew, until it was taking up plenty of valuable decking real estate. There were a lot of cardboard boxes, of all shapes and sizes, from jelly crystal and bikkie boxes, through to nappy and big packing or freight boxes. 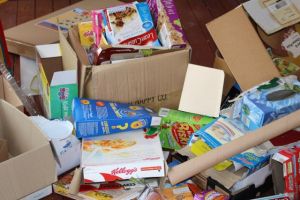 And what would we do with so many boxes? Well, the answer to that is Boxtown! The end of our deck was transformed into a city this morning by L, A, Big L and myself. Baby T wanted to help, but it was nap time, so he flew off to dreamworld while the rest of us got our builders’ hats on. 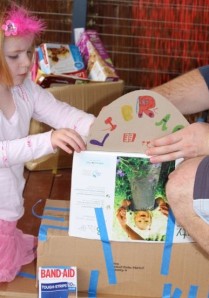 The first large building to be built was a library (I think this must be a reflection of how much we like to read!). L made a lovely sign for the top of it, and both kids helped me tape the boxes together. A tried to attach a thin cracker box as a walkway to another building, but she never made the other building to attach it to, so it just stuck out at the side of the library. Well, at least it did until it fell off, and A didn’t notice, so I didn’t mention it.

Hospital with chopper on the heli-pad.

There was also a hospital, complete with heli-pad and helicopter. The helicopter even had a red cross on its side and rotors that could spin. Besides the hospital was an airport and runway made out of painters tape. L made some planes out of cardboard rolls to live at the airport. 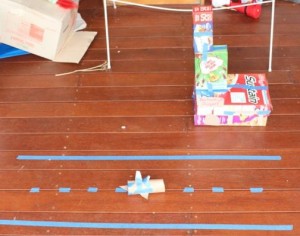 There were other small buildings too, including a dental clinic made from toothpaste boxes, a restaurant made from a yoghurt container, and a doctor’s surgery made from bandaid boxes. These were chosen and made entirely by L, who sorted through the boxes until she found the appropriate ones 🙂

The biggest building in Boxtown  was the office block. Big L helped the kids make it so big, it actually stood taller than L. It was a large skyscraper towering over the rest of Boxtown. A used markers to draw some windows and doors, and make it “pretty”, while L made a sign for it. She wrote the word ‘work’ all over the sign so we had no doubt what was supposed to occur inside the office block, though she made no suggestion as to what work her workers would be performing.

There were also a few houses. A decorated a shoe box, giving it some chimneys and windows, which I think was a house. L made a large dog house too.

This was several hours of building fun, and then some more fun playing in the city. And once the kids have finished playing with Boxtown we will recycle it and reclaim our deck 🙂