I’ve made these little egg nests a few times in the last couple of years, but I can’t remember where the idea came from originally. They are a big hit with the kids, and really easy to make.

I’m not great at measuring things when I cook, and if I’m not following a recipe I’m even worse, so I just estimated the amounts. I used about three cups of Kelloggs rice bubbles, and about two-thirds of a packet (250g) of Cadbury white chocolate melts.

The kids put the patty pan cases into the muffin tray, and then got ready to mix the chocolate and rice bubbles. I melted the chocolate in the microwave in a ceramic bowl in thirty second bursts, stirring regularly until the chocolate was smooth. I poured it into the mixing bowl and the girls got mixing. Their wooden spoons clashed a few times, and some of the mix went flying, but they had fun, and they got the job done. It’s best to mix quickly before the chocolate cools too much.

Once mixed, we used a desert spoon and a teaspoon to place some of the mixture into each of the patty pan cases. We pushed the mixture down, and then formed a well in the centre using the teaspoon (this is where the eggs sit). Once we’d filled the muffin tray, we still had some mixture left over, so I carefully spooned it into some loose patty pan cases in the same way. All up this mixture made sixteen egg nests.

Then it was time to add the little eggs to the nests. These eggs are Cadbury mini-eggs which are milk chocolate on the inside with a candy coating. I like these mini-eggs because they have speckled shells, and nice colours, but I only seem to be able to get them at Easter. We have used other mini-eggs at other times of the year which were bright colours, and a little smaller than these, I think. They still worked nicely. The kids placed two or three eggs into each nest (and possibly a couple into their mouths!). The tray and the extra patty pan cases went into the fridge to set.

Once the chocolate was set these egg nest treats didn’t last long! 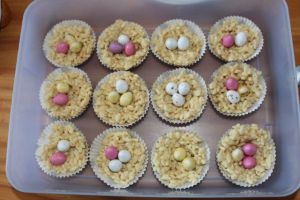