The hardest part of making this cake was the figure on the beach. I made the girl, her towel and the tree from fondant the day before I needed them. The rest of the cake was decorated on the morning I needed it.

Fondant snakes before rolling out.

To make the girl’s towel, I started with two lumps of white fondant, one I coloured red, the other blue. I made little snakes in each colour, and carefully lined them up side by side, alternating colours. I sprinkled some icing sugar over the top and then carefully used my rolling pin to flatten the snakes. The two colour stripes joined together as they were rolled out. I then cut off the uneven ends, forming a rectangle to use as the beach towel.

I used a very small amount of pink food colouring added to the white fondant to make the girl. I shaped this into a basic body shape, with the arms folded under the head. I added some green coloured fondant to the body for her swimmers, and for her hat. Where required, I used a little bit of jam to stick the separate fondant pieces together.

The one palm tree was fairly easy to make, though I needed to use skewers and toothpicks to prevent it from drooping or falling over. First I coloured some fondant green, rolled it out flat and cut out some leaf shapes using a sharp knife. I used the side of a toothpick to make the marks on the leaves. For the trunk, I used Nutella to create a nice brown colour, which I then shaped into a trunk shape. I stuck a skewer longitudinally through the trunk to keep it upright on the cake, and two toothpicks perpendicularly through the top to support the leaves. I draped the leaves over the toothpicks, using a little bit of jam at the top of the trunk to stick them together.

Cake cut and ready for icing.

The actual cake was two large rectangular cakes made in my baking pans (each takes a double cake mix). I placed the cakes side by side then used a sharp knife to cut out the ocean section. I left part of the cake for an island, and the edges prevent the jelly from falling off the cake. I skimmed some of the cake off from the island to create a sloping beach area.

Waiting for the jelly ocean.

I used a basic butter cream mixture colouring a portion of it green, and a portion of it yellow. I covered the island area with the green butter cream, and the beach area with the yellow butter cream. I made up another lot of butter cream and coloured it blue, which I used over the rest of the cake, down the sides and onto the cake board for the ocean. On top of the green butter cream I added green coloured desiccated coconut for grass. The beach was made using finely crushed plain sweet biscuits (I used Arnotts Nice), and the ocean was filled with blue jelly (berry flavoured, yum yum!). I added a little bit of blue butter cream to the top of the jelly for the waves.

Once all the icing was done and the jelly added, A helped me place the towel and girl onto the beach, and then the tree up on the grass. The skewer through the tree went right through to the base of the cake. As a final touch, A added a cocktail umbrella to shade the girl.

This is quite a large cake, but it could be made to a smaller scale. It went down very well with all the kids!

Girl lying on the beach.

All my kids are Octonauts crazy and have been for ages, so when T’s birthday came around, it made sense for us to make an Octonauts cake. L suggested that I somehow sculpt a whole 3D octopod, she even drew me some plans! I thought this would be way too difficult and time consuming to manage, so I attempted something rather more simple using Octonaut figures (which I bought from Toys’r’Us)

This cake was still a little time consuming, but it was fairly easy to make. The cake base used a double quantity of butter cake mix (I had some Greens mixes in the cupboard that I used). The ocean used two packets of blue Aeroplane Jelly (berry flavoured, yum!), and the rest was butter cream and crushed Nice biscuits for the beach sand.

The cut-out section of the cake.

The cake was baked in a rectangular baking dish. Once it was cool, I cut out a section on the top where I wanted the ocean to be. I cut into the cake to a depth of roughly 1-2cm, leaving an edge to contain the jelly. At one corner, I left a larger section to make into a beach.

I made up the butter cream, keeping some of it white to use on the beach. I spread the white butter cream over the beach section and down the sides of the cake, then I made the ‘sand’. For this I used three Nice biscuits (any sweet light coloured biscuits could work), and laid them on some baking paper. I folded the baking paper over the biscuits, and then used my rolling pin to crush them. Once I was happy with the consistency of the ‘sand’ I transferred it from the baking paper to a bowl, and began spreading it over the white butter cream, gently pressing it down across the top of the beach and down the sides of the cake.

The rest of the butter cream, I coloured using blue food colouring with a dash of green to make it closer to the colour of the jelly. The colour was quite intense, and did stain my fingers a little while I was icing the cake. I covered the edges of the cake in blue butter cream, down the sides and around the edge of the cake directly onto the foiled cake board. I iced the blue part of the cake roughly to make it appear more like waves.

I smooshed the jelly with a spoon and added it to the cut-out section in the centre of the cake. I spread it out carefully to the edges, making sure that the cake was covered, but not overflowing. Then it was time to add the figures. 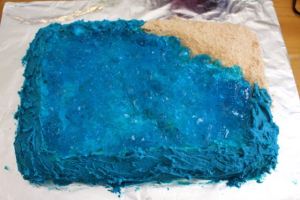 The cake ready for the figures.

A and L helped me to place the figures onto the cake. Captain Barnacles went in the Gup E in the water with the fish rescuing net and some fish. Peso went directly into the water, while Professor Inkling was up on the beach. We raided our stash of animal figurines and found a palm tree and some funny flat bushes that A thought looked like seaweed. The palm tree went onto the beach, and A placed the seaweed around the edge of the cake on the icing on the cake board. All the figures were washed before and after use on the cake. 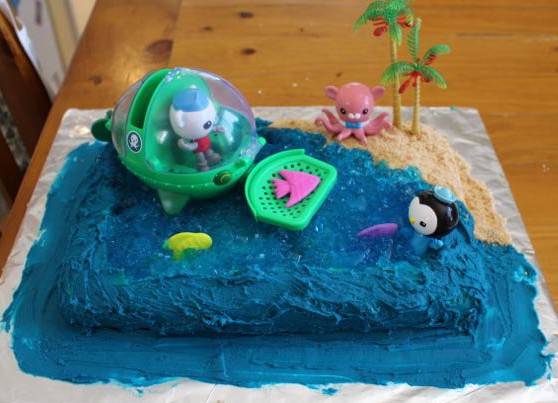 Just before the seaweed was added.

I was happy with how the cake looked, and it tasted delicious. T was also thrilled to get the Octonaut figures to play with afterwards. He asked to blow out the candles three times too!

The kids love to eat jelly in just about every flavour. They like to slurp it up, and squish it between their teeth, and unfortunately, drop it on the floor. So I wondered if they would also like to play with it. I was going to just make up a batch of jelly that they could stick their hands into, but then I saw a ‘Jello Excavation’ at Tinkerlab, and thought that would be even more fun. 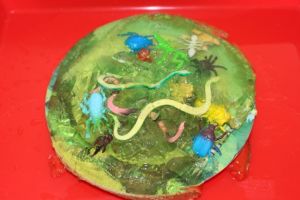 So I made up two packs of lime jelly and as it cooled I dropped little plastic bugs and critters into it. I think I might have added too much water though, as the jelly was a bit soft. Then again, it was Coles brand, and I normally use Aeroplane jelly, so maybe it was meant to be like that.

Being a little wobblier than normal made it harder to get it out of the bowl in one piece, despite the spray oil I’d used in the bowl, but most of it came out intact. I placed it in a tub and put it outside for the kids to play with. I’m very glad it was an outdoors activity as, predictably, A got into the tub with the jelly before they were finished. She said it was to feel it squish between her toes. She likes to feel all of our messy and sensory play things with her feet… maybe she just likes to be extra messy 🙂

They used various implements to pull the critters out, and play in the jelly. They added in some pretend play too, making up gross critter food orders, such as bug soup with a side of slug slime and a snake milkshake. The jelly got thoroughly churned with a whisk, and was pushed through a sieve, put into cups and funnels, and spooned into the watering can, along with most of the critters. No one tried to eat the jelly, which surprised me. 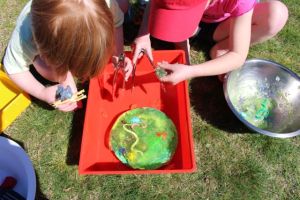 Rescuing the bugs and animals from the jelly with tongs.

Pushing jelly through a funnel.

It was very messy, but very fun.

I found an old tin of edible gelatin in the cupboard this morning, so I think I will use that for our next jelly play. I will make it firmer so that the kids can cut it into chunks and really excavate the bugs and critters, maybe with some spoons as digging implements. Looking forward to another chance to have a jelly dig in the backyard.