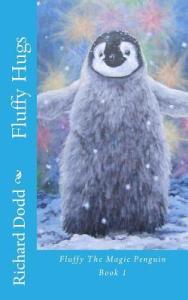 Fluffy is a baby emperor penguin, born in captivity within a zoo. Fluffy is a little different to the other penguins in the enclosure, as he can understand what the humans are saying. He discovers he has other magical abilities too, which he can put to good use helping animals and people.

Fluffy Hugs is a short and simple story; a bit of magical fun with one of the cutest animals in the world, a fluffy, grey penguin chick. Who could resist such a sweet little fellow? I would definitely hug him! Being able to use his hugs to help is an unique talent, but I really liked his ability to travel about the world just by thinking about it.

Fluffy Hugs did not take long to read. My seven year old could probably knock it over pretty quickly too, and I think she would enjoy it a lot. Magical animals are in at our house! There were a handful of simple line drawings within the book which I liked. I think the story could have been enhanced by more illustrations, due to its short nature.

Fluffy Hugs would be suitable for lower primary school students and reluctant older readers. It is the first book in a series chronicling Fluffy’s adventures. The next book in the series, Minty Visits, is also available now.

Tovi the Penguin Goes to the Seaside by Janina Rossiter, picture e-book, published in 2016.

Tovi and his two friends have gone to the beach. They set up camp, build sandcastles and swim, but something unexpected happens while they take a nap!

My kids love penguins of all shapes and sizes. They will spend hours watching them at the zoo, and in documentaries, as well as reading about them in both fiction and non-fiction books. So Tovi the Penguin definitely took their fancy!

Tovi the Penguin Goes to the Seaside is a cute story about friendship and fun at the beach. The language is easy to read, and the text is clear. There are little pieces of speech associated with each penguin, aside from the main narration, which we liked.  The story is nice, and I enjoyed reading it aloud to my toddlers.

Bright, simple illustrations adorn every page. Can you spot the ladybird in each picture? I like the sandcastle and the sea creatures that the penguins see when they are snorkelling.

Tovi the Penguin Goes to the Seaside is suitable for toddlers, preschoolers and lower primary school students. It is part of a whole series of Tovi the Penguin stories. We hope to read more about Tovi soon.

A found these foam spoon kits in Riot Art & Craft last week. She picked out two for her and two for L (who was not with us at the time). They were only a couple of dollars each, and they gave us an hour or so of Christmas crafting fun.

Each pack contained a foam spoon and all the bits to attach to the spoon to make a penguin, Santa or reindeer.

Sticking on the reindeer’s head.

The penguin packs had foam with a sticky backing so all we had to do was peel off the backing paper, and stick it where it had to go. The only problem with this was that the sticky area of the body pieces were much wider than the spoon, leaving the back of the body with nothing to stick to. The reindeer and Santa packs weren’t self-sticking, so we used craft glue to attach the foam pieces to the spoon.

L and A very carefully followed the pictures to create their spoons. For some reason A’s penguin pack had two wings the same, instead of a left and right wing! She didn’t really care though, she just stuck the second wing on upside down and told me the penguin was waving.

Sticking on the penguin’s beak.

We have displayed these Christmas spoons up on the wall. They are very cute!