We cracked out the Christmas glitter paint and foam Christmas stamps to make some festive art.

Usually I would put the paint onto sponges so that the stamps don’t get overloaded with paint. Unfortunately we were out of sponges, so some of the pictures were a bit gloopy, but they still look nice. And importantly the kids had fun!

3D fabric paint with glitter, oh we had to try that! It came in a pack of six colours with easy to use nozzle applicators. I bought some cheap white pillow cases for the kids to paint on, and I placed some thick cardboard into the pillow case to prevent the paint from running through to the other side. I used pegs around the edges to keep the pillow case flat while the kids were painting.

The tubes only needed light pressure to squeeze the paint out, but A was a little heavy-handed at times, and her paint went on very thickly. She didn’t like the look of this, so she took a paintbrush, and spread the paint out over the pillow case. This made a glitter rainbow that she was very pleased with. She asked me to squeeze more paint out in lines all over the pillow case, and she used the paintbrush to mix it. She had lots of fun doing this, though it meant that the 3D look of the paint was lost.

L preferred to paint a picture on her pillow case. She drew mountains and hills, the sun, grass and herself standing next to her trampoline. She was much better able to control the flow of paint than A, and she even mixed some of the colours to create new colours.

Once they were done painting we left the pillow cases to dry. We could have painted on the other side after a few hours, but we chose not to. We followed the instructions on the paint pack, leaving them to dry for a couple of days prior to washing them. Once they were washed and dried, the kids put them on their pillows. Due to the 3D nature of the paint, it is raised a little and the kids said it feels funny to sleep on. This is why I asked them not to paint on both sides. They can have the painted side on display during the day, but at night, they just flip the pillow over and sleep on the smooth, unpainted side. They are both happy with this. 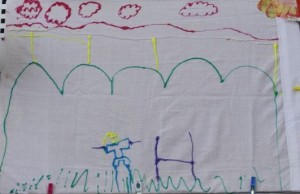 Join 323 other followers
Follow Today We Did on WordPress.com