I saw this recipe on The Organised Housewife last week, and thought it looked like a quick and easy Christmas food idea. I went to gather our ingredients, but our local grocery store didn’t have any normal pointy ice-cream cones! They had plenty of flat bottomed cones, and waffle cones. I’d already told the kids I had a Christmas activity in mind for after dinner, and I didn’t have time (or the desire) to drive elsewhere to find the cones, so we went with waffle cones.

These could have made some very wonky Christmas trees, so I carefully cut off excess cone using a knife, so that when the cones were turned upside down they sat on a plate without falling over. The bits of cone that I cut off, Big L ate with ice-cream, buttercream, Nutella and sprinkles later.

L helped me to make up a portion of light green buttercream, which we used to cover the cones with. Then we added red and green m&ms, pastel coloured sprinkles and mini m&ms. The kids added jelly babies to the top point of their trees at the star/angel.

This was fun, messy and very sweet, but a great activity around Christmas time. 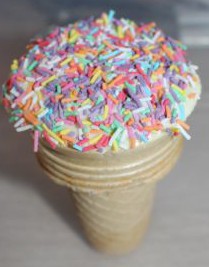 We had a birthday on a school day for the first time recently, and A asked me to make cupcakes to take along for her class to share. She had seen cupcakes made in mini ice-cream cones somewhere before, and suggested we could make some. I did do a trial run before the big day to make sure I had it right. It turned out to be a rather easy undertaking, and I have made several batches now with great success.

I have used a few different brands of mini ice-cream cones, and have found that the square based cones seem to be a bit more stable than the round based ones when the cake mix is in them, but both work quite well.

I lined the cones up on a baking tray, in this instance I used pizza trays, and then fill the cones to about two-thirds full with cake mix. I have only used butter cake mix for these cupcakes, but I’m sure it’s only a matter of time before the kids ask for them made with chocolate cake! I have been baking these cupcakes at a slightly lower temperature than normal, and I check them regularly to prevent overcooking. Sometimes a bit of the cake mix will overflow the cone and drip down the side, but if too much overflows, the cone goes soggy and collapses! So it’s important not to overfill the cones.

Once the cupcakes have cooled down, I used a basic butter cream frosting to ice the top of the cupcakes. I placed the sprinkles in a bowl, and then dipped the frosted cones into the sprinkles, making sure the tops were completely covered in sprinkles.

The kids in A’s class were delighted with the ice-cream cone cupcakes, and were amazed to find the cones filled with cake and not ice-cream! They were a big hit, and made A very happy.

Dipping the cupcakes in sprinkles.